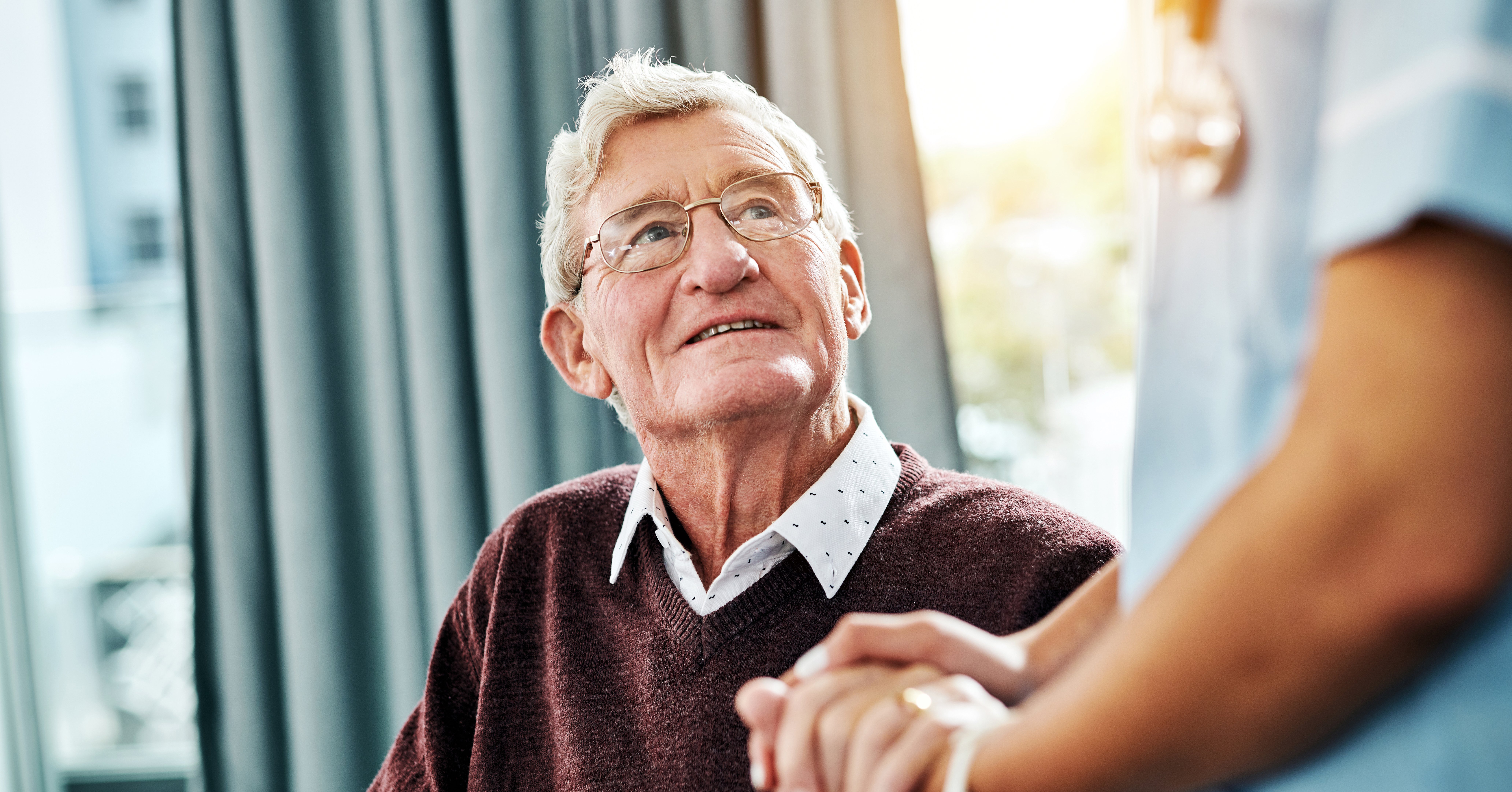 The world is on track to see an unprecedented surge in cognitive care needs.

With the baby boomers now in their 60s and 70s and, thankfully, set to live longer lives, the older adult demographic will grow rapidly in the years ahead. In fact, By 2050, people over 65 years will represent more than 20% of the population. But, as the older adult population increases in number, so too will the prevalence of conditions that most affect this group.

Thanks to new research and medical technology, common causes of death like stroke and heart disease decreased between 2000 and 2019. Alzheimer’s disease, however, doubles in prevalence every five years after age 60. And it’s the fifth leading cause of death for adults 65 and older. This makes addressing brain health a particular challenge.

With the strain on specialist supply already worsening, are we prepared for the upcoming surge in cognitive care needs?

Currently, the US healthcare system is largely reactive in its approach to brain health, identifying disease only when symptoms have already emerged and individuals require care from a specialist. However, these experts are in short supply, and the rising care demands of our aging population will only exacerbate this. In fact, projections estimate that there will be a 19% shortage of neurologists in the US by 2025.

This is a serious problem when you consider that already long wait times will continue to rise. Patients with Alzheimer’s disease or related dementias can wait as long as five years for a diagnosis after symptom onset. And then, even after a diagnosis, wait times for appointments remain high. The average time for an adult to see a neurological specialist in 2012 was 35 days and has only increased since. This makes regular screening and earlier detection more critical than ever.

While there are promising developments on the horizon, there’s still no pharmaceutical “cure” for Alzheimer’s disease at present. Continued investment and research are vital, but we shouldn’t simply wait for a breakthrough – we need to do more with the tools we have now to get further ahead of brain health disorders and improve outcomes.

Bringing brain health in line with other areas of healthcare
The success of standard screenings for cancer and cardiovascular disease prove that a regular and proactive approach to detection (and risk factors) can help move the needle on health outcomes. What’s more, The Lancet Commission, reported that modifying risk factors could prevent or delay up to 40 percent of dementia cases. Proactive cognitive assessments, earlier detection, and timely intervention could therefore be crucial in tackling the cognitive crisis.

Brain care often only becomes a priority once a patient or a family member raises concerns – again, likely when symptoms are already present. Barriers like the stigma associated with conditions like dementia can make patients reluctant to speak up about symptoms though, further delaying diagnosis and intervention. By reframing the conversation and starting it earlier in primary care settings, providers can help to raise awareness of cognitive conditions and reduce this societal perception. However, we’ll most move the needle by catching cognitive decline before symptoms arise and cause these patient or caregiver concerns.

So, how can primary care providers (PCPs) in particular enable a more proactive cognitive care approach?

Shifting more brain health into primary care
An Alzheimer’s Association survey found that 96 percent of PCPs think it is important to assess patients aged 60 and older for cognitive impairment, but do so for less than half of patients in this age group today. Removing barriers to more widespread assessments and better empowering PCPs to perform them is essential to shift more brain care for older generations into primary care – facilitating better triage and prioritization for specialists, as well as earlier intervention.

With at least one-third of risk factors for dementia modifiable, time is of the essence to implement lifestyle and health changes that can have a meaningful impact. Low physical activity, for example, can double the risk of developing dementia, but even small improvements can have a big impact. Regular cognitive assessments can not only help providers spot signs of issues early, but also identify these modifiable risk factors and communicate their importance to the patient.

Newer digital detection methods are more efficient and sensitive than traditional paper-based assessments (such as the MMSE or MoCA), helping clinicians discover cognitive impairment early and act quickly to influence its trajectory. The digital nature of them also offers a host of other benefits, such as allowing clinical staff, other than providers themselves to perform them too – making it more practical to expand cognitive assessments for older adults in busy primary care practices.

Treat the person, not just the condition

By 2034, approximately 77 million people aged 65 or older will be living in the US. And nearly 60% will have at least two chronic diseases. Moving away from a reactive approach will facilitate earlier detection of cognitive decline and help us better care holistically for our growing older adult population.

Putting a greater emphasis on early detection and making it more feasible empowers everyone – providers, patients, and loved ones – while improving the healthcare system at-large. It allows clinicians to create care plans that increase health span, not just lifespan. We’ve seen the power of early detection in so many other areas of healthcare – now it’s time for brain health to catch up. 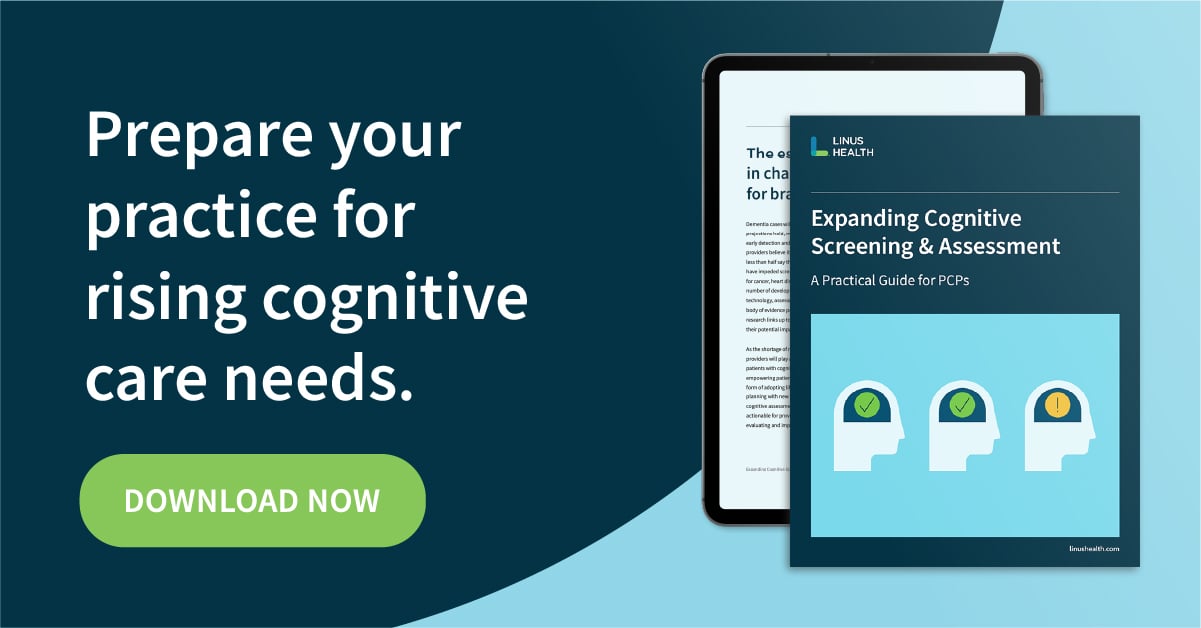