Linus Health’s Core Cognitive Evaluation™ (CCE™) is a digital assessment solution that combines objective assessment of cognitive function to detect early signs of cognitive impairment with an evaluation of brain health risk factors to assess the risk of developing dementia in the future. The CCE is composed of two components: The Digital Clock and Recall (DCR™) and the Life and Health Questionnaire (LHQ).

The DCR is a highly sensitive screening test which includes more than 50 graphamotor metrics for early detection of signs of cognitive impairment and offers the clinician specific, actionable recommendations regarding diagnostic and therapeutic steps.

The LHQ is a quick screening of life and health factors relevant for dementia assessment. The answers to the LHQ are necessary for three important outputs of the Linus Health’s Healthcare Delivery platform. First, the LHQ estimates whether or not an individual is at an elevated risk of developing dementia in the coming years based on modifiable risk factors that can be dealt with at the present time. Second is the generation of patient-facing educating material that aims to empower individuals to take active steps toward better brain health. This patient education tool is informed by scientific evidence, highlights areas that need attention, and provides personalized actionable recommendations that an individual can take toward attaining better brain health both in the present and in the future. Third, the LHQ provides clinical decision support in the form of recommendations that guide clinicians on best practices in cognitive decline and dementia care.

The dementia risk estimation dervied from the information gathered in the LHQ aims to predict one’s likelihood of developing dementia within 12 years. This risk estimation was developed by a data-driven approach and informed by validated instruments such as the Lifestyle for Brain Health (LIBRA) and the Cardiovascular Risk factors, Aging, and Incidence of Dementia (CAIDE) risk scores (Kivipelto et al., 2006; Schiepers et al., 2018). These risk scores include demographic factors such as age, as well as modifiable risk factors like physical activity.

The CAIDE risk score, developed 20 years ago, has been validated in numerous cohorts, age groups, and nationalities, and is widely used (Kivipelto et al., 2006). CAIDE was developed in a longitudinal cohort study in Finland that demonstrated the possibility of  predicting dementia risk in middle-age and late middle-age individuals using only six variables: age, education, sex, systolic blood pressure, body mass index, total cholesterol, and physical activity. Each of these factors are weighted based on the strength of their association with incidences of dementia. For example, in the CAIDE model, age is the most predictive factor for dementia and thus has the largest weight at 4, among other factors such as sex with a weight of 1. The person's overall score is predictive of one’s risk of developing dementia over the next  20 years. One disadvantage of this model is that 50% of the score is determined by non-modifiable factors such as age and sex. Thus, its utility for translation into actionable recommendations is limited.

The Lifestyle for Brain Health (LIBRA) model was developed in 2018 and exclusively focuses on modifiable and predictive factors that reflect an individual’s ‘prevention potential’ for dementia (Schiepers et al., 2018). Similar to the CAIDE risk score, the factors are weighted based on their power to predict the development of  dementia. Important to distinguish, is that LIBRA also takes into account protective factors which reduce one’s risk of developing dementia, thus lowering the risk score. For example, cognitive activity is highly protective against dementia risk and is weighed at -3.2. Other protective factors include adherence to a mediterranean diet, and low to moderate alcohol intake. While depression is strongly predictive of future dementia and is weighed at 2.1.  Other predictive factors include physical inactivity, smoking, obesity, type 2 diabetes, hypertension, high cholesterol, heart disease, and chronic kidney disease. Unlike the CAIDE score, the LIBRA risk score does not take into account age and education level (strong - albeit not modifiable - risk factors for dementia) (Schiepers et al., 2018).

The CCE, via the LHQ,  enables clinicians to obtain insight into key evidence-based factors that have been reported to influence the likelihood of developing dementia in a given individual. The CCE dementia risk estimation employs a proprietary algorithm to integrate seven different risk and protective factors and their relative contribution in the development of dementia risk over a period of approximately 10-12 years, according to validated estimates (when available) and/or published estimates (Schiepers et al., 2018). While the specific algorithm is proprietary, at a high level, the most predictive factors in the CCE risk estimation include cognitive activity and depression, followed by those with a medium level of predictive power such as physical activity, diet, physical health, and smoking.  Alcohol intake  has a lower level of predictive power. Specific factors and their associated weights based on validated instruments were used to implement a Monte Carlo simulation (Kroese et al., 2014; Rubinstein and Kroese, 2016) to estimate the distribution of dementia risk in the general population. An individual is considered to be at  ‘elevated risk of developing dementia’ in the future if they are estimated to be within the top quartile of dementia risk in the general population (Schiepers et al., 2018). Individuals in other quartiles do not carry an elevated risk of developing dementia, given their current life and health factors. 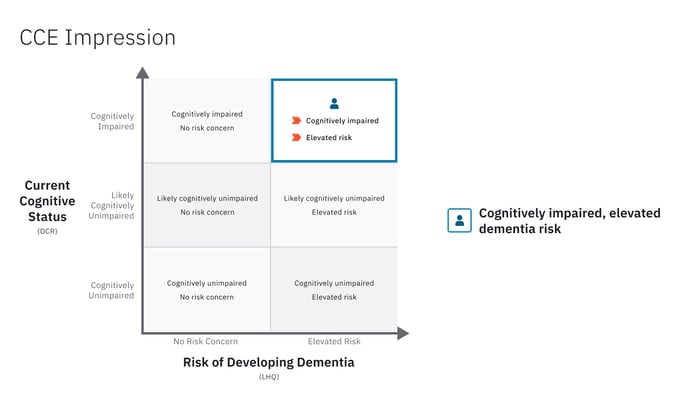